The interface is a little unreliable, but fortunately it tells us if there is a valid temperature to read. It’s like a file, so all we have to do is read

Ebay Kit
The Sensor is powered by a +5v rail from pin 2 of the Pi. The trigger pin comes from pin 16 (Gpio23) and this tell the sensor to start measuring. The echo pin in normally low until the sensor sends an output then it goes +5v for the time the sensor took to measure the distance. This is the reason for the resistors as the GPIO can only handle a +3.3v. 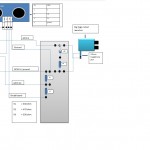 This is the code and diagram to fire the big trak rockets using the ultra sonic sensor on the Pi. The aim is to have the the rocket pod attached to Big Trak with the sensor at the front.The code is simple it will ask for a distance i normally say 80 (8cm).It will then print out the measurements every second until there is one below 80 then it`s fires the rockets , takes a picture using the call function and switches the LED on. This code is a work in progress so if you see any way to improve it I would like to hear.

This is the only bit of extra software you need.

You do need to make some changes to the config files.

Find the IP address of your Pi.

This should show the live feed from your webcam.

On another machine open notepad and copy the text below in to it :-

Save it as webcam.html , then open it in a browser and again you should see the feed . The important bit is in apDiv1 this is the code that displays the stream . Make sure to change the IP address to your PI.

I found you can not have to streams open on the same machine so if the webpage does not load make sure you do not have any other streams open. 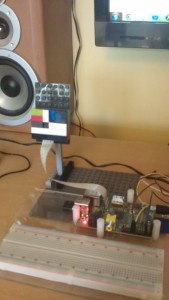